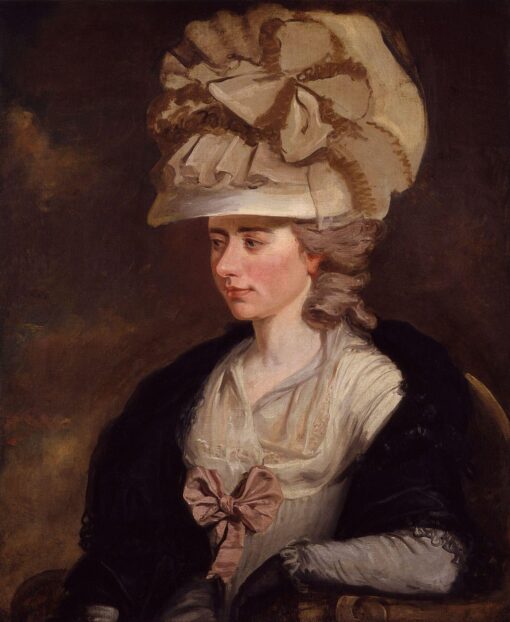 Fanny Burney (Frances d’Arblay, née Burney) was born on June 13, 1752, at King’s Lynn, Norfolk, England. She died on January 6, 1840, in London. She was an English novelist and letter writer, who was the author of Evelina, a landmark in the development of the novel of manners.

Fanny was the daughter of musician Charles Burney. Self-educated her literary apprenticeship was much influenced by her father’s friend Samuel Crisp, a disappointed author living in retirement. It was to “Daddy” Crisp that she addressed her first journal letters. She was considered the least promising of the clever Burney children, Fanny moved unnoticed in the circles of the great, confiding her observations to Crisp.

Her practice of observing and recording society led eventually to her novel Evelina; or, The History of a Young Lady’s Entrance into the World. Evelina revealed its author to be a keen social commentator with an attentive ear for dialect and the differentiation of London speech. The book was published anonymously in 1778 and it took London by storm. No one guessed it was by shy Fanny Burney, then 26.

When the secret was out, Burney’s debut into literary society was launched by the fashionable hostess Mrs. Thrale. It took time for Fanny to overcame her shyness but once she did she could match wits with Dr. Johnson himself, who was very kind to her between 1779 and 1783 when they both made long visits to the Thrales. Burney’s journals provide vignettes of contemporary scenes and celebrities and for Burney’s own secretly expressed delight in being famous.

Her next novel, Cecilia; or, Memoirs of an Heiress, 5 vol. (1782), incorporated morally didactic themes along with the social satire of Burney’s first novel into a more complex plot. Though lacking the freshness and spontaneity of Evelina, this novel was equally well-received, but Burney’s success was shadowed by the death of Henry Thrale in 1781, of Crisp in 1783, and of Dr. Johnson in 1784. In 1793, when she was 41, Burney married Alexandre d’Arblay, a former adjutant general to Lafayette, then a penniless French émigré living in England. They had one son. In 1796 she wrote a potboiler, Camilla; or, A Picture of Youth, and on its proceeds the d’Arblays built a house in Surrey, where they moved in 1797. D’Arblay died in 1818. Mme d’Arblay then retired to London, where she devoted her attention to her son’s career and to the publication of her father’s Memoirs (1832). An edition of her journals and letters in eight volumes was published 1972–80.