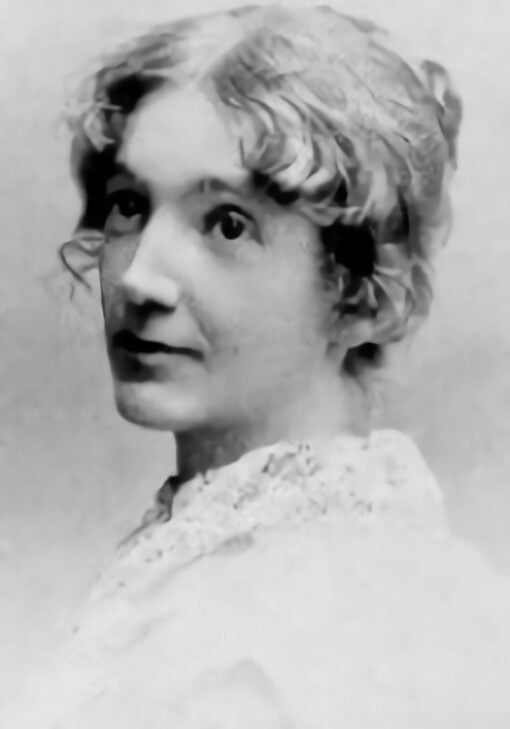 Ethelwyn was born of English Quaker parents at Rockwood, Ontario, on April 26, 1857. She was one of eleven children of Jemima Harris Balls and William Wetherald (founder/principal Rockwood Academy and later Quaker minister). Her family then made the move to Pennsylvania where her father William became superintendent of Haverford College. It was only two years later that the family moved back to Ontario. She was further educated at the Friends’ Boarding School, Union Springs, N.Y., and at Pickering College. Ethelwyn never married, but did adopt a daughter Dorothy Rungeling.

Ethelwyn Wetherald had been known principally as a journalist and poet, but she also co-authored an historical romance novel “An Algonquin Maiden: A Romance of the Early Days of Upper Canada” with Graeme Mercer Adam in 1887. Her first independent publication, “The House of the Trees and Other Poems”, was published in 1895 and two more books of verse were published in 1902 and 1904 (“Tangled in Stars” & “The Radiant Road”). She also worked in both prose and verse as a contributor to “The Christian Union”, “The Chicago Current”, “The Week”, “The Canadian Monthly”, and “Toronto Saturday Night”. She also worked as an editor and contributor for the Globe using the pen name Bel Thistlethwaite and was part of the editorial staff for The Advertiser in London, Ontario. Ethelwyn also worked as an assistant to editor Francis Bellamy of the “Ladies Home Journal” and assistant to editor Forrest Morgan of “The World’s Best Literature”. In 1921, she published a book entitled Tree Top Morning, which she dedicated to her daughter Dorothy Rungeling who also became an author. In the last few years of Ethelwyn’s life, she contributed to the Welland-Port Colborne Evening Tribune children’s column “Patty Perkins Club”. She used her own name and occasionally used the pseudonym “Octo” for octogenarian.